In 2009, Jack & Russ hacked on an early prototype of SeatGeek for the Dreamit Ventures summer class in Philadelphia. The initial prototype came together in the last two weeks before demo day. I remember that Russ hadn’t shaved in weeks because they were spending every night hacking.

You see, before that, the founding pair knew they wanted to start a company, but they weren’t sure about the idea. They had brainstormed ideas ranging from “WebMD for pets” to “amateur art marketplaces”, finally landing at “Yelp for Bloggers”, an idea they called Scribnia. This got them into Dreamit Ventures.

And that idea was the one they worked on during the summer incubator program in Philadelphia, but it didn’t take off the way they expected. After a couple solid months of working on it, they realized that there wasn’t a solid business model behind it, and the consumer traction was not what they had expected, either. They re-grouped and switched to a service to predict the prices of sports and concert tickets.

That lead them in the direction of a business model and a new brand, SeatGeek. Even though they knew they were on to something, it took them another year to discover that the focus on the price scoring mechanism was not actually that important. Instead, people just wanted a good consumer experience to search and find seats in concert halls and sports stadiums across the country. They also realized a huge gap in easy mobile commerce in this secondary ticket market.

So, they spent a few years investing in that product and that market. They creatively grew their user base (2011), launched important features (2012), and beat their competitors (2013). Oh yea, all while hiring a world-class team and raising capital to support their growth.

Those years of hard work led them to where they are today: $25M/year in revenue, and the “hottest ticket in mobile.” 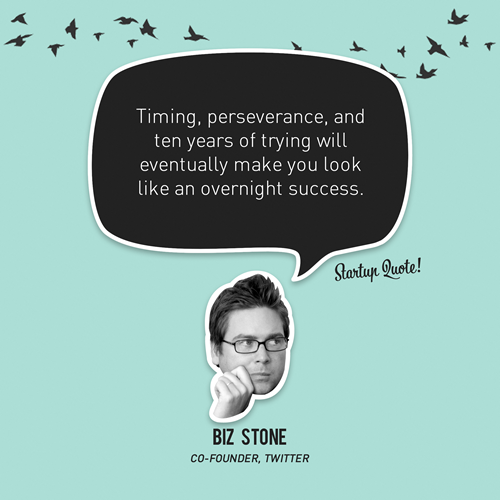 So, when people say, “I’d start a company, but I just need an idea” — remember, this is what entrepreneurship really looks like. Years of hard work and discovery, until, eventually, you take off. As Biz Stone from Twitter put it, “timing, perseverance, and 10 years of trying will eventually make you look like an overnight success.”