This is Andrew Montalenti’s personal site for code, essays, and ideas.

Andrew was the founding CTO of Parse.ly, a real-time and historical content analytics platform running on thousands of sites. In February 2021, Parse.ly was acquired by Automattic, the fully distributed company behind WordPress.com, WooCommerce.com, and WPVIP.com.

Andrew is a long-time Pythonista, with a deep interest in web startups, SaaS, and distributed systems. He has released popular open source software, including streamparse, a parallel programming framework that has been used to make Apache Storm accessible to Python programmers and to scale production Python code to 3,000+ CPU cores. He also enjoys technical writing; to this end, he has published The Elements of Python Style, a popular Python code style guide.

Andrew codes primarily in Python, JavaScript, Clojure, C… and Zig! He is also a manager of software teams who has been leading the fully distributed way for over a decade, spanning Fortune 500 firms, mid-market companies, and high-tech startups.

Nice to meet you!

So, that’s the impersonal third-person description of me. Now that we’ve met, I’ll switch to the first-person voice 🙂

As the technical co-founder and CTO of Parse.ly, I built a fully distributed engineering, product, and design team that shipped a real-time and historical content analytics platform trusted by the web’s best brands and publishers. After years as a manager of a high-performing software team at Parse.ly, I’m now taking a step back from all that! Lately, I’m spending my spare time honing some builder skills in old and familiar open-source-friendly areas like message passing systems, parallel computing approaches, low-level code, OS kernel internals, and the Unix philosophy.

Years ago, I ran a free e-mail newsletter, Fire and Motion, which discussed technology startups and business from the trenches. It’s no longer actively updated but the archive of past emails is here. Speaking of archives, all my blog posts on this site are archived by year here. 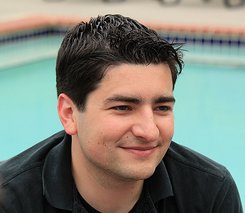 Why am I writing and coding?

The short answer is: I want to make your life better. I believe the best ways to accomplish that goal include the conveyance of ideas and the application of technology.

Tech has always been an obsession of mine, but not my only one. I still like to think of myself as a student, of Computer Science and other things. If I had all the time in the world, I’d get several university degrees, probably in History, Economics, Philosophy, Mathematics, and English. Since I don’t have infinite time, I settle for reading about those topics and others in my spare time. In that sense, I take pride in my relative well-roundedness, especially for a bona fide computer geek.

(Note: If you are looking for my contact information or want to find out where I hang out on social networks, go to the “Contact” page.)

You’ll find less about my personal life here. You’ll find a little discussion of political topics, such as the media, economics, and ethics. But, mostly, you’ll find essays that focus on technology, usually related to computer science, open source, software teams, and high-growth tech startups. Some posts will dive deep on programmer topics, centered around Linux, Python, Clojure, JavaScript, and other programmer tools.

Personally, I am inspired by the United States’ founding document, the Declaration of Independence. Here is a reproduction of the preamble and first sections:

When in the Course of human events, it becomes necessary for one people to dissolve the political bands which have connected them with another, and to assume among the powers of the earth, the separate and equal station to which the Laws of Nature and of Nature’s God entitle them, a decent respect to the opinions of mankind requires that they should declare the causes which impel them to the separation.

We hold these truths to be self-evident, that all men are created equal, that they are endowed by their Creator with certain unalienable Rights, that among these are Life, Liberty and the pursuit of Happiness.

That to secure these rights, Governments are instituted among Men, deriving their just powers from the consent of the governed.

That whenever any Form of Government becomes destructive of these ends, it is the Right of the People to alter or to abolish it, and to institute new Government, laying its foundation on such principles and organizing its powers in such form, as to them shall seem most likely to effect their Safety and Happiness.

Prudence, indeed, will dictate that Governments long established should not be changed for light and transient causes; and accordingly all experience hath shewn, that mankind are more disposed to suffer, while evils are sufferable, than to right themselves by abolishing the forms to which they are accustomed. But when a long train of abuses and usurpations, pursuing invariably the same Object evinces a design to reduce them under absolute Despotism, it is their right, it is their duty, to throw off such Government, and to provide new Guards for their future security.

Such has been the patient sufferance of these Colonies; and such is now the necessity which constrains them to alter their former Systems of Government…

It is through this historical document that I justify my own yearning for change as nothing less than the true American spirit.