Trello has announced a $10M+ venture financing round and they are going to expand the product and team. This was a bit of a surprise to me, because Spolsky had always been critical of the VC-funded tech startup industry on his blog over the years.

But in the blog post, he explains, he has really been critical of the kind of company that this industry typically breeds. So, he has made his life’s work creating companies with a different “operating system” altogether. 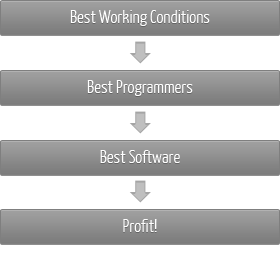 It includes a “physical layer”:

clean and pragmatic programming practices, pushing decisions down to the team, hiring smart people and letting them get things done, and a commitment to inclusion and professional development

and a “human layer”:

no matter what we do, it’s guided first and foremost by obsession over being fair, humane, kind, and treating each other like family

That architecture is all the stuff I spent ten years ranting on this blog about, but y’all don’t listen, so I’m just going to have to build company after company that runs my own wacky operating system, and eventually you’ll catch on. It’s OK to put people first. You don’t have to be a psychopath or work people to death or create heaps of messy code or work in noisy open offices.

Indeed. I have read Spolsky’s essays for years — ever since I was a junior in high school, about 14 years ago, when he ran probably the only widely-read programmer blog. My favorite essay of his, Fire & Motion is also the name of my personal email newsletter. And his principles of company management, project management, and the business of software were critical to the culture I tried to build at Parse.ly.

His picture shows up in every slide deck when I discuss our company culture with new hires. And though he only came around recently on the importance and power of remote work, the fully distributed team we built here uses the same principles, the same “operating system”, that he describes.

Other business managers and startup founders would be wise to go back in his archive and learn from his lessons. The examples may be dated, but the principles are timeless.

Update: An excellent discussion of this article appeared on Hacker News.