Let’s say that you want to make some money at the horse tracks. The guy behind the booth gives you the following choice:

Most people, even if they don’t know much about horse betting, will rightfully think The Option is the way to go. No matter how much information you might have about each of the horses and riders before the race, the information you gather during the race is much more valuable. A top-ranked horse might break a leg, or its rider might trip up on the start. Even if you pick a favorite before the race begins, once it gets going and you see him lagging behind, the economic reality put in front of you will override your speculative capacities.

In short, it’s easier to play the option than the bet. It’s less risky. It’s more fun. There are less ways to lose. So, it’s no surprise most horse betting does not work this way. 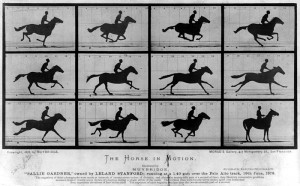 However, let’s analyze the interesting crowd behavior that emerges during a race where The Option is available.

Let’s say one horse suddenly pulls ahead of the pack. Those who are paying attention and who hold the option will quickly exercise it. Many other gamblers will miss their opportunity, creating an oversubscribed horse.

Take another example. Since the bets are public, other gamblers will be inclined to pay attention to signals from the gamblers with the best past record of picking horses. If a well-known gambler with an excellent record picks a horse in the middle of the pack, its two other spots will likely fill up very quickly.

Some gamblers will avoid making picks based on sudden movements by the horses or other gamblers. Instead, these less emotional players will wait until a reasonable time period before the end of the race — say 30 or 45 seconds. They will wait until they have all the trending information necessary to make a call. They won’t mind picking a #2 or #3 winner — they just want minimal risk of picking a loser.

Finally, some horses will go unpicked altogether. That’s not to say they aren’t strong horses with a lot of potential. They just have a lot of perceived risk. And gamblers don’t like taking on risk when The Option gives them a way to altogether mitigate it.

A horse race with The Option at play seems complicated enough, but let’s change the rules a little more. Let’s say the race doesn’t end — doesn’t have a set start time and end time. Let’s say that once a horse gets 3 options exercised on it, it’s removed from the race. Let’s say new horses enter the race every day, and that horses only tend to run for between 2-5 minutes each. After 5 minutes, most riders remove their horse from the race on their own.

In this new race, small signals have a big impact. Charge ahead suddenly and you might get your 3 spots filled. Convince a top-tier gambler to go to bat for you, and you’re all set — your other two spots will fill up quickly. If you’ve been in the race before and had your spots filled up quickly, you’ll likely get them filled up quickly when you enter the race again.

Managing which options to exercise also becomes a little trickier. With new horses entering all the time, the biggest gamblers will start to have a horse flow management problem. They’ll delegate some of the initial analysis and tracking work to junior gamblers. Riders and horse owners will start to do outrageous things to get noticed by the gambling ecosystem.

As but one horse of hundreds or thousands, it will therefore become possible for you to run a steady race without any of these signals, and basically go unnoticed in the crowd. Occasionally, you will get considered by the unemotional, data-oriented gamblers. However, they will wait until the last possible minute before pulling the trigger on your option, because it is in their interest to do so.

Do the Gamblers Change the Game?

One has to wonder what effect The Option has on the race. For example, if the goal is to leave the race via The Option — rather than to cross the finish line — will some riders start slow and then sprint quickly ahead to attract the fast-acting trend-followers? Will some riders try to network with the top-tier gamblers before they enter the race, to win their favor outside the game itself?

Would any gambler even choose The Old-Fashioned Bet anymore? It seems to me the only time someone would is if the rider and horse had such a great past record, that they were a favorite to win. No-name rider and newly-trained horses will never garner Bets, only Options.

And what about those hundreds of mid-range horses that never make sudden forward motions? Instead, they slowly and steadily continue to beat their best lap time. They aren’t flashy and never catch a glance from the top-tier gamblers, or even the stadium audience. For them, there is but one choice: Keep riding. Keep pushing. A gambler may notice you at the last moment, just when you think you haven’t any stamina or wherewithal left.

Sure, it won’t seem fair, to see all these other horses leaving the race early. But don’t look left and right — just look ahead. Before you know it, you may not even care about The Option, since you will have crossed the finish line all on your own.

So, next time you hear a “maybe” when you ask someone to bet on your horse, remember: it’s easier to play the option than the bet. The reason you entered the race in the first place was to ride like hell and win for yourself, not to be someone else’s winning bet.