I am teaching a technical course on the popular and ubiquitous version control system, Subversion, this Monday. I thought it might be fun to give my class a little “extra credit” reading from the O’Reilly book, Beautiful Code. In it, one of the original authors of Subversion, Karl Fogel, shares what he considers to be the most beautiful internal design within the codebase: the SVN delta editor. Though this API is not directly used in doing Subversion development, I thought it might be cool for students to have a deeper understanding of the thought that went into SVN’s codebase. But when trying to print up some copies of the chapter for the class, I got more than I bargained for… 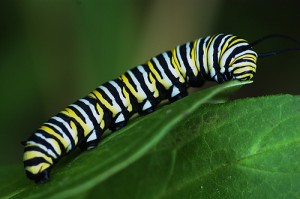 I highly recommend the entire book. It is not so much a book about beautiful code as about passionate and opinionated programmers and their tastes. But this is a good thing. It was one of the few books about software that I have read in the last decade or so that actually gave me entirely positive feelings about my profession. There is so much raw creativity and thought captured in these few essays. What Brian Kernighan finds beautiful is entirely different from what Matz or simonpj find beautiful. And that’s the thing about a fundamentally creative craft like software. You put five software engineers in a room with a piece of code, and you’re lucky if you come out with only six different opinions about it. It’s like art, or writing. Taste matters.

I don’t recommend people read Beautiful Code to try to imitate some of the code described therein. Instead, I recommend you read it as a sociological or psychological study of what makes proud and bright software engineers tick. For example, for Kernighan it is the simplicity and minimalism that is embodied in UNIX. For Matz, it is the notion that the programming language should be as syntactically flexible as our real languages are. For simonpj, it’s that complicated can be made easy, given the right abstractions. And for Jon Bentley, in one of the more thought-provoking essays in the book, beauty and elegance was only perceived as the size of his code shrank. 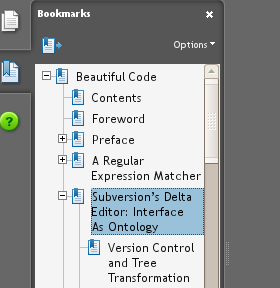 The essay about the SVN Delta Editor not only illuminates the internals of SVN, but also illustrates the social dimension to software engineering and design. It is a story about programmers, debating an API, producing it, and then putting it into practice. It is about give and take, and an unteachable skill in problem size and complexity reduction. All this in C! There was a period of time in university where I actually programmed in C full-time, so I have a lot of respect for the elegance with which they crafted this powerful API. C gives you few tools (like OO or explicit interfaces) for doing this kind of work; they had to work in spite of the language’s features and plan carefully.

I have about twenty students in my class, so I was going to print up one copy and get it copied and stapled at a local print shop. (See note on copyright below.) I opened up my ebook PDF of Beautiful Code with acroread on UNIX. I navigated to the right chapter and realized that I wanted to print just that single chapter. I always remember being annoyed whenever I had to do this, for a number of reasons.

It’s really not that bad, and it’s only an occasional annoyance, but it’s always there. I’m sure you know what I’m talking about.

I had recently upgraded to acroread and noticed that the UI was all spiffed up. And I noticed that this ebook had the right metadata for the bookmarks. I thought to myself, “Wouldn’t it be nice if acroread supported printing a chapter?” I right-clicked on the first entry in the chapter bookmark and was astonished. Lo and behold, my feature existed! (See the image to the right.) I clicked the “Print Pages…” button with a bit of discomfort. I don’t trust software too often, and am always suspicious when I find a feature I didn’t expect to be there. It’s like my inner programmer is saying, “Yea, right — too good to be true.”

A few minutes later, my chapter was printed. I looked it over, and brought it with my other materials to the local print shop. One hour later, I picked up my copies and brought them home to look them over.

I noticed something very strange. Instead of my copies containing pages 42-57, they contained pages 42, 43, 46, 51, 55, and 57. Damn it. There didn’t seem to be much of a rhyme or reason to the pages that were selected. What kind of sequence was this? I felt that there must be some pattern, some fibonacci-like, non-obvious sequence that applied to these pages. I suspected the first, and obvious, culprit: that the printer had made a mistake. Maybe it’s a human error. But then I looked over my original and indeed, the original only had those pages. Not a human error. I thought to myself, “How is this possible?” 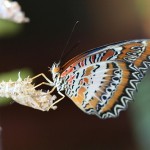 Of course, I’ve probably given you enough information that you’ve already figured it out. Especially if you’re a programmer. We’re just wired to think this way. But in case you haven’t figured it out, I’ll indulge you.

When I went back into acroread, tracing back my steps, I noticed something about that menu item I clicked. It didn’t say Print chapter. Instead, it said, Print pages. Now, conceptually that seems like a small distinction, but I picked up on it.

I started to think like a programmer, rather than a user. This function with a for loop emerged from the program and hovered above it, almost magically. It said:

Then I realized the pattern in the pages it picked. There was no pattern. This was a beautiful little bug. A butterfly.

You see, within the narrow world of this Print Pages function, the “feature” works as expected. But from a user’s perspective, it makes absolutely no sense. Rather than printing everything from that bookmark to the next bookmark at the same level (that is, rather than printing a chapter), it printed each individual page that happened to be physically bookmarked (or ‘sub-bookmarked’) in the PDF, at or below that level. This resulted in a bunch of pages being printed that happened to be the pages on which subsections began. But this left out most of the chapter, somewhat randomly.

The worst traits of our profession come out when it is at its least social. I have no doubt that this function that prints these pages was written by a single programmer in a windowless room, without any peer review, pair programming, or other check on his logic. I am sure that he was given the narrow and ill-defined requirement to enable an action to “print bookmark pages”. He needed to think, but instead, he decided to code. And coding got “it” done, for some very weird value of “it”. He was probably under time pressure. But one thing is certain to me: he was alone. No two programmers, debating the design and implementation of this feature, would let each other make this mistake.

The behavior it exhibited truly caught me by surprise. Strange as it sounds, I admired how easily I had been duped by this feature. The human error — the anti-social error — made by that programmer exhibited an odd and enigmatic computer behavior. A human inelegance created a strange sort of cruel machine elegance.

I found it ironic that in trying to print a chapter about beautiful design from a book called Beautiful Code, I came across this beautiful bug. I call the bug beautiful because it managed to fool me, to get me to suffer its wrath while thinking I was getting some convenience. It exhibited behavior that challenged me to identify a pattern, where there was none. It was so clever, it even cost me money (the printing charges). And even though I was a discerning programmer — skeptical of the feature, and so unsure of the software’s operation that I checked the output, albeit too briefly — this little bug managed to outsmart me.

My students will have to live without the chapter, or read it online on their own. I’m not upset about it. There can be beauty, even in failure.

A note about copyright: some readers on reddit and on my comments section suggested that I might be ignoring copyright issues by thinking that I could just photocopy a chapter from this book to distribute to my students. Trust me, I know about copyright. The content of this chapter happens to be available online for free under Creative Commons Attribution 3.0. Karl Fogel, the author of the article, has even given his informal blessing in my comments section. And finally, by most people’s interpretation of the rules of Fair Use, it was OK for me to copy a chapter for my classroom. I’m surprised no one suggested that this bug might be beautiful in another way: that it saved me from a copyright disaster. I don’t think it was that good… 🙂 If you are really interested in seeing a debate about this, you can read this thread on reddit. Warning, somewhat painful and longwinded. (Also, if you clicked the anchor link within the article to get to this note, simply click “back” in your browser to return and continue reading.)

11 thoughts on “Beautiful Code and a Beautiful Bug”