This is the most important post to read this election cycle. Thanks to ProPublica’s liberal terms, I can re-publish it in its entirety here. I’ve also included links to the excellent interactive features at the end of the story.

About a week before election day, a young girl, maybe 10 years old, confronted Colorado House candidate Sal Pace in a pew at his Pueblo church. “She said, ‘Is it true that you want to cut my grandmother’s Medicare?'” Pace remembers.

Like many other Democrats around the country, Pace has spent months trying to rebut the charge that President Obama’s health care reforms hurt Grandma by cutting Medicare by $716 billion. In fact, the same cuts in payments to medical providers found in Obamacare can also be found in the House Republican budget, and they do not directly limit patient care. “I told the little girl that the ads are full of lies and that it’s not right for people to lie,” he said.

What Pace couldn’t tell the girl was who exactly is to blame. That’s because the moneymen behind the outfit spending the most on the Medicare attack ads in Pace’s district will not show their faces. The money is being spent through a Washington-based group, Americans for Tax Reform (ATR), that calls itself a “social welfare” nonprofit, so it does not need to reveal its donors to the public. In mid-October, the group popped up in Pace’s district, which is about the size of New York state, and promised to spend $1.3 million there in the campaign’s final three weeks. In one day, Pace spokesman James Dakin Owens said, “They basically matched us dollar for dollar for everything we had raised in the campaign. It was an 800-pound gorilla that just jumped in.”

This sort of thing has been happening a lot this year in House and Senate races around the country. Candidates have found their modest war chests, filled with checks for $2,500 or less, swamped by outside groups, which have no limits on the donations they can collect. In all, more than $800 million was spent through mid-October on election ads by outside groups, according to the Center for Responsive Politics. Of that total, nearly 1 in 4 dollars is so-called dark money, meaning the identities of the donors remain a secret. Voters watching TV, listening to the radio or receiving direct-mail appeals know only the names of the front organizations that bought the ads, names that range from the well known (U.S. Chamber of Commerce) to the anodyne (Government Integrity Fund) to the borderline absurd (America Is Not Stupid).

Ads purchased with untraceable money tend to be among the most vicious. Nearly 9 in 10 dark-money spots are negative, and an analysis by the Annenberg Public Policy Center found that 26 percent of the ads are deceptive, a slightly higher rate than that for ads by groups that disclose their donors’ identities. In a year that has been marked by enormous enthusiasm among wealthy conservatives, there is another trend in anonymous spending: Almost all of it u2014 83 percent, according to one review u2014 has been directed against Democrats. This has some in Obama’s party fretting about the outsize ability of wealthy individuals and institutions to shape the electoral landscape while hiding their identities behind front groups. “If we don’t find some way to respond to this, it’s going to turn us into a plutocracy, where a very few powerful people control the public agenda,” said former Ohio Gov. Ted Strickland.

Most of the secretive spending this year has been coordinated through a close-knit network of veteran Republican strategists in Washington who meet regularly to share polling data and decide which group should focus on what races around the country. “There’s no duplication. There’s no wasteful survey research done,” says Scott Reed, a Republican consultant working on the U.S. Chamber of Commerce advertising effort. “They have totally changed the way you run a campaign.”

The man behind the Colorado ads, Grover Norquist, is not shy about discussing the mechanics behind mounting multimillion-dollar dark-money campaigns. His organization works closely with such other dark-money giants as the U.S. Chamber; Crossroads GPS, co-founded by Karl Rove, a former adviser to George W. Bush; and Americans for Prosperity, founded by Charles and David Koch. While the groups can’t talk to campaigns, they can talk to one another. “For years, coordination was the thing you couldn’t do,” Norquist says about the shift in power from campaigns to outside groups. “Now it’s the thing you are most allowed to do.”

Not only do the groups share strategy, but they can share money as well. Under current rules, many campaign-finance lawyers say, nondisclosing groups must spend less than half their budget on political communications to keep their social-welfare status. In practice, this means there is a cost to anonymity. For every dollar spent on a dark-money political ad, another dollar must be spent on some nonpolitical effort. But by sharing, these groups have found ways to make the money go further.

In 2010, Crossroads GPS gave a $4 million grant to Norquist’s group, ATR u2014 money that was earmarked for nonpolitical activities. Norquist used the money to finance his regular operations, freeing up about $4 million from other sources to spend on political communication. In effect, the nonpolitical Crossroads GPS money was transformed into political money by passing it through ATR. “That is part of the sales pitch you make to donors,” Norquist explained. “If you contribute a dollar to ATR, you are freeing up another dollar that you have already raised.”

Norquist would not say if he had received another large grant from Crossroads GPS this cycle, but he did say he expects the group’s political spending to have nearly tripled in 2012 to about $12 million. As for Pace, Norquist said the ads running in Colorado are meant as punishment for the candidate’s voting record in the state legislature. “What does he think we are going to do?” Norquist asked. “The tax-raising twit.”

Federal oversight of these groups is close to nonexistent. Of the roughly 104,000 people who work for the Internal Revenue Service, about 900 work in the tax-exempt division that monitors this spending. There is little hope of forcing groups like Norquist’s to disclose the identities of their donors. Republicans oppose such steps, and the courts have made it easier for the groups to operate secretly. A 2010 decision by the Supreme Court overturned a law banning unions and corporations from giving directly to efforts intended to influence elections. A subsequent court ruling created super PACs, independent groups that buy campaign ads with unlimited checks from disclosed donors. They now work in tandem with dark-money groups in races around the country.

That means there are likely to be far more candidates facing Pace’s predicament. In California’s Central Valley, José Hernández, a former farmworker and NASA astronaut, has been withstanding blistering attacks on television from outside groups as he challenges Representative Jeff Denham, a freshman Republican. Over the course of the year, Hernández has faced $3.1 million in outside spending against him, by the U.S. Chamber and a group called the American Action Network, neither of which discloses its donors. That is more than twice as much as Hernández has been able to raise for his campaign. “These folks have been throwing everything on the wall to see what will stick,” says Hernández. “It makes our job harder, but a lot of people see through all of this.” The election on Nov. 6 will tell how many.

With reporting by Kim Barker and Justin Elliott/ProPublica

This flow visualization explores the connection between various PACs and Super PACs, their levels of support, and the campaign organizations they are actually benefitting.

This visualization explores where the money actually comes from: the biggest individual donors to the Super PACs who are sustaining their activities. 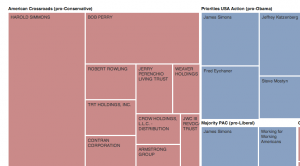